Latest additions to our portfolio. Companies we are proud of.

Launch of the Bvlgari Pop Up Store

Home Case Studies Launch of the Bvlgari Pop Up Store

Bringing a Luxury Brand to a new dimension in Retail. 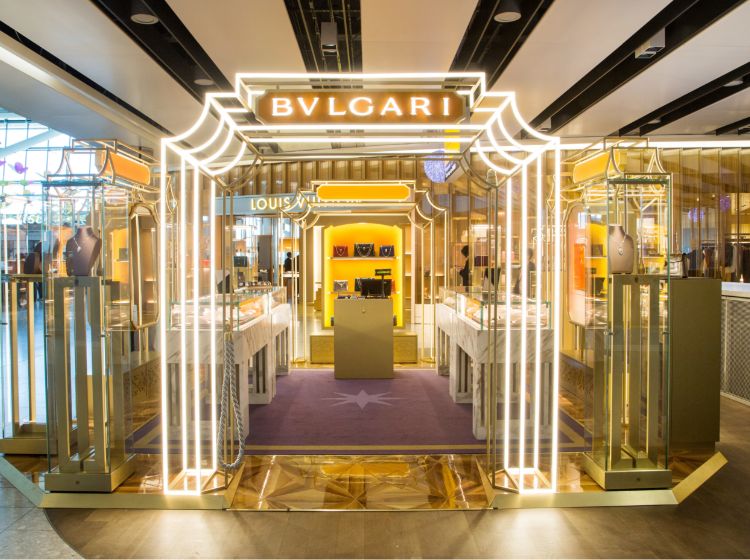 For many brands waiting for the ‘right’ space in major airports can be challenging as most contracts are a minimum of 5 years and don’t come up for renewal often. New space is generally only created during major refits and therefore the options are limited.

Bvlgari had been waiting a considerable time to return to Heathrow Terminal 5, and were examining different ways to make this happen, to prove the sales potential of the brand to the airport. No luxury brand had considered the option of a Pop-Up store as it had not been deemed prestigious enough.

Working in very close collaboration with Bvlgari and the Airport Authority initial designs were presented for a Pop-Up store. Locations were visited,  long discussions held, as space that is not currently retail cannot be simply changed use without the consent of many different departments. Designs were exchanged across all parties with the many considerations such as security, capacity, staffing all to be considered and agreed.

During the process the concept was also presented to Helsinki Airport where space was also very limited for several years ahead. The agreement on space in this location was a little simpler and gave the opportunity to test the concept before launching in Heathrow.

Once plans had been agreed and terms negotiated the stock had to be ordered and shop fill and replenishment agreed. When dealing with product made to order it can be exceptionally challenging to reserve the correct quantity especially when trialling a new concept. The high value nature of the investments made by both companies was a major consideration and had to be presented internally to senior management for approval.

The opening of the Bvlgari Pop Up in Helsinki was a major event for the airport and the brand and heavily publicised. There had to be a snagging list and follow up plan to ensure the Heathrow one was flawless.
Timescales in these projects are at best challenging and, with pressures to open in peak trade, it is vital to have clear channels of communication and all parties fully advised.

The Heathrow Pop up opened on time, with only a few glitches along the way, all of which were resolved efficiently after opening.

The sales have been above expectations and all parties satisfied with the results.

Further Luxury brands have since considered this as an option.

What the Supplier said about this

It has been a real pleasure collaborating together with Moyra on developing successfully the Bulgari brand in the key airports operated by Dufry. Action-oriented, I also appreciate particularly her problem-solving approach and her knowledge of the luxury business. I wish her all the best and keep going with successful projects!

Based on strong leadership skills I can advise and recommend on influencing others by engaging staff, team building and motivation and I will ensure to deliver innovation, fun, honesty and inspiration.

Are you looking to develop a global brand? With experience in developing brands such as SuperDry, Pandora and Sunglasses Boutique into multi-million pound global brands, I can lead you through an exciting process.

What are the next steps for your brand? If you are looking to expand your exposure and increase turnover then we need to develop a strategy to that will get your brand/products in front of the right people.